In the 4th part of this series of posts we look at a different way of data modeling for APIs, one that is based on Linked Data standards. First, some background and terminology. The terms that define the associated technologies have been the subject of debate, as well as the technologies themselves. In essence, these are Semantic Web technologies we are talking about. 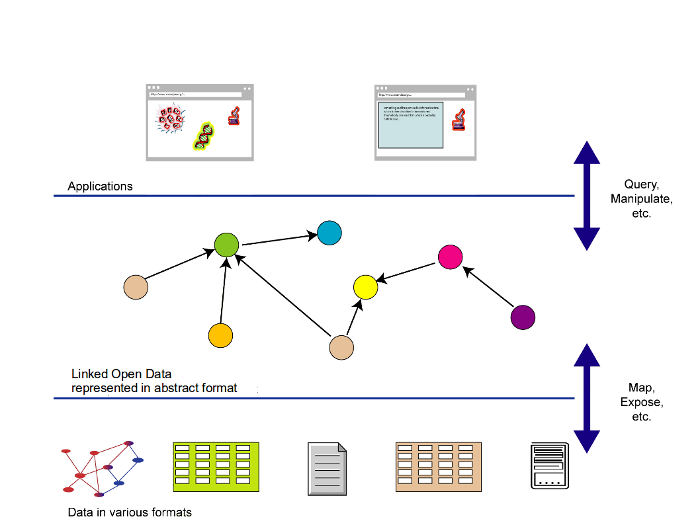 The Semantic Web technology stack is meant to support a “Web of data”, the sort of data you find in databases. The ultimate goal of the Web of data is to enable computers to do more useful work and to develop systems that can support trusted interactions over the network. The term “Semantic Web” refers to W3C’s vision of the Web of linked data. Semantic Web technologies enable people to create data stores on the Web, build vocabularies, and write rules for handling data. Linked data are empowered by technologies such as RDF, SPARQL, and OWL. Let us quickly explain the most relevant ones for our use case.

RDF: Resource Description Format – the data format for the Semantic Web. Can be expressed in different notations/syntaxes (e.g. XML, N3, Turtle etc) but in all cases the essence of it that every RDF statement is a triple: <subject> <predicate> <object> – e.g. <https://www.slideshare.net/scorlosquet/produce-and-consume-linked-data-with-drupal> <isA> <presentation>. In essence RDF is an graph-based entity-attribute-value model.

Ontology: a ‘specification of a conceptualization’ – or a way to represent knowledge about a domain in a way that is formal and machine-interpretable. Ontologies are more advanced RDF schemata, allowing for extra constrains, specifications etc.

OWL: Web ontology language. The W3C standard for ontology representation. OWL ontologies (as well as their ‘instances’ – the data they specify) can be expressed in RDF.

SPARQL: a query language (and https-based access protocol) for RDF data – the RDF counterpart for SQL, except more powerful, as it allows things such as distributed querying and complex graph processing out of the box. W3C standard.

Linked Data: a way to publish and consume data on the web that relies on 4 rules:
1. Use URIs as names for things
2. Use https URIs so that people can look up those names.
3. When someone looks up a URI, provide useful information, using the standards (RDF, SPARQL)
4. Include links to other URIs. so that they can discover more things.

If you think that the Linked Data approach looks a bit like REST, you’re right. The idea is that resources are reference-able and reachable via their URI. However the use of RDF and SPARQL lend more power and flexibility to the idea.

First, in terms of data modeling. One of the strengths of the Linked Data approach has to do with the powerful data modeling languages and the public repositories of schemata. RDFS and OWL offer capabilities that go way beyond XSD and JSON schema, and on top of that there is a growing repository of publically available Linked Data schemata that can be reused and referenced.

This is not all however. Perhaps the most important aspect of using Linked Data technology for data modeling is that it provides a very powerful API out of the box via SPARQL. So not only can you specify unambiguously the semantics of your data objects and their properties, but you can also enable access to them via SPARQL. SPARQL is a powerful mechanism that goes way beyond the typical PUT/GET/etc REST access to enable a fully fledged query language on top of your data.

Let us see a quick example of how this would work in practice. Imagine you are developing some application and want to provide an API for it, how would this be done using Linked Data technology?

To begin with, it all depends on how you have chosen to develop your data model and what your data store is. We will only cover the relational store case here, as currently this is the most commonplace option and the one that is well covered by Linked Data tooling. The data model may have been developed independently, or it may have been informed by an existing Linked Data schema. If the latter is the case, the relational db structure to support it will somehow reflect the schema it is based on.

This is it! If these 3 steps are completed, the result is a SPARQL front end that lets any type of query be executed remotely against your application’s data store. This is the equivalent of having direct access to the db, so it should be handled with care. On the one hand, there may be security issues, although they can be handled on the web application layer, as this is what mapping tools essentially are. On the other hand, this may not suffice for cases where complex sequences of actions are required. In such cases, the development of an additional API facade layer to abstract the intrinsic details of low-level data manipulation will be needed.

Now let us see how this approach fares in terms of the criteria set previously to evaluate data modeling techniques for APIs: While i understand that this option is not for everyone, i must say it is one i personally favor. Indeed, it takes some getting used to to overcome the “meh” that Semantic Web seems to inspire to most business users, however if you make the investment, it will most likely pay off. We have only begun to scratch the surface of what is possible with Linked Data here, using as much of a down to earth use case as possible. We have not even touched at some other benefits of this technology, such as inference – the ability to use your domain model to generate additional knowledge.

However let us conclude by emphasizing the fact that by leveraging this technology, your data can instantly become part of the global Linked Data cloud. What this means in practice is that data break free of their hidden web silo and become discoverable, enabling mashups and the generation of value beyond the application that produced them in the first place. This however is big topic in and by itself, and therefore beyond the scope of this post.

In the next part of the series we’ll look into even more exotic options for data modeling for APIs, such as Google protobuf.